The first review of my book

Here is the first review of my book, valuable as it is from a fellow hockey historian. 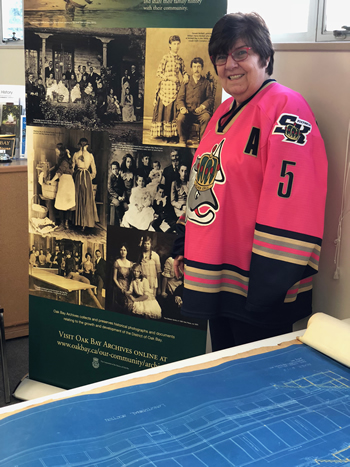 If there was a shelf in a bookstore for “Passion Projects,” you would definitely find Helen Edwards’ new book there. It’s called The History of Professional Hockey in Victoria, and, while she’s been working on it for eight years, in reality it’s been a life-long journey.

Edwards has lived in Victoria, British Columbia, all her life, and has been a hockey fan for most of that time. It started when a radio station offered tickets to Victoria Cougars games for a nickel, and then she had season tickets for the Victoria Maple Leafs—“I had season tickets because I was finally working”—and, much later, the Victoria Salmon Kings.

A devasting two-some in 2011 resulted in the book. For one, the ECHL’s Salmon Kings closed up shop, and are the last professional team to play in Victoria. The other was the death of Bill Shvetz, who’d been a Maple Leafs’ defenceman.

“They were a big part of my life, and I suddenly realized that if somebody didn’t document even their part of history, they would all be gone,” said Edwards over the phone. “We’ve got very few of those guys left now. I started researching and I found there was very little information other than the Patricks—everybody writes about the Patricks—but nobody delved into statistics and stuff.”

An architectural historian by training, Edwards decided she was the right one to document hockey history in Victoria, from the Lester and Frank Patrick’s Pacific Coast Hockey Association in 1911 to the Salmon Kings. The History of Professional Hockey in Victoria is 612, 8×10 pages, of statistics, results of every pro game ever played in the city, with profiles of key people and 483 players, and the buildings that housed the games.

“I’m a historian by trade and this just combined my fabulous love of hockey with historical research, so it was easy—it just took a long time,” she said. Of note, there are copious end notes, she added: “If anybody doubts a source, it’s there; I’m very thorough, that’s all I can say.”

Edwards can also say that she was miffed and annoyed at times. Some interviews escaped her completely, like the elusive Jamie Benn of the Dallas Stars, who grew up in Victoria; Jamie’s older brother Jordie Benn has signed with Vancouver, and Edwards expects to wag a finger at him — and indirectly at his little brother — at the upcoming Canucks training camp.

Missed interviews are one thing, misogyny is quite another.

“When I phoned people to ask if I could interview them, ‘Oh, you’re a girl, you don’t know anything about it.’ I couldn’t believe it. This is the younger guys, right? The old guys, my God, they talk to you for hours—and some did,” recalled Edwards.

Her reply to a doubter? “I’ve been watching hockey since long before you were born, hon.”

It didn’t stop her. “I’ve run into it all my life,” she said, working in a male-dominated profession, historical architecture. “There, it was not a problem, because it was a history of buildings and nobody cared if you’re male, female or otherwise.” For more on her day job, check out Edwards Heritage Consulting (http://edwardsheritageconsulting.ca/)

The History of Professional Hockey in Victoria was self-published through Friesen Press, and distributed to select book stores and online (ORDER HERE  — https://books.friesenpress.com/store/title/119734000067775471/Helen-Edwards-The-History-of-Professional-Hockey-in-Victoria ). However, if you happen to be in Victoria, Edwards is more than happy to share a cup of tea, talk hockey and sell you a book.

“It’s never going to be a bestseller, but I’m proud that it’s out there,” said the long-time Society for International Hockey Research member. “It’s a labour of love and it’s a thank you to all those guys” who played hockey in Victoria. 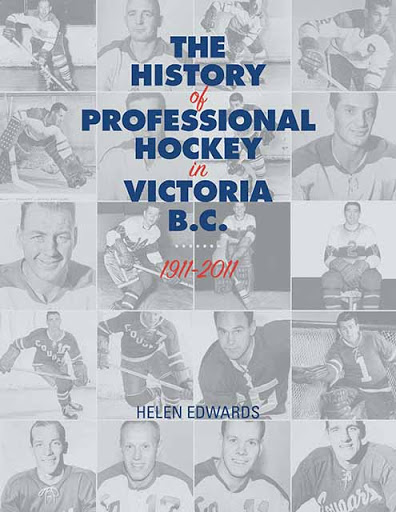 My book is in the Hockey Hall of Fame (Archives)

I am pleased to announce that the D.K. Seaman Hockey Resource Centre in Toronto has received their copy of the book. I had a long conversation with Craig Campbell about the book and got terrific feedback from him. He said that what they really need at the Centre is local histories as everyone trends to write about NHL stars and cities and neglects the fascinating local stories. He said they also would like local programs, etc. so I am looking through what I have accumulated during the research process and will donate any that I have. It is far better to benefit the researchers of the future than to have them sit in my filing system where nobody else can see them.

The History of Professional Hockey in Victoria, BC: 1911-2011
by Helen Edwards

The History of Professional Hockey in Victoria is an in-depth examination of professional hockey in Victoria. It includes details on the different leagues, statistics on every game played by a Victoria team, and information on every player to dress for at least one regular season game.

From the Patrick family to RG Properties, this book covers the ownership of teams and records the highlights and low points of every team.

It was produced as a “thank-you” to the players who entertained Victorians over a century, giving us reason to cheer on many occasions and to be disappointed as well. Victoria enjoyed three championships, including the Stanley Cup victory in 1925. Little did the Cougars know that they would go down in history as the last non-NHL team to win the Stanley Cup, and the last non-NHL team to play in a Stanley Cup series. They were also the last West Coast team to win the Stanley Cup until Anaheim did it in 2007. The 1950-51 Cougars, led by their “kid line” of Andy Hebenton, Bob Frampton, and Reg Abbott, won the league title while the Maple Leafs (with Hebenton in the lineup) won the Lester Patrick Cup in the1965-1966 season.

Included in the narrative is the story of the construction and operation of the different venues in which games were played. The politics behind arena construction are examined as well, with editorial cartoons to make the reader laugh about the folly of some ideas.

Biographies of selected players tell the story of individuals and how they came to play hockey in Victoria. Learn from behind-the-scenes stories told by the players themselves.

Lavishly illustrated, this is a book for those who love hockey history and its connection to Victoria, BC.

Exhaustive, almost encyclopedic, if that’s a word—Helen Edwards has fully, thoroughly, completely compiled the details that give the most detailed and authoritative look possible at the incredible and entertaining history of professional hockey in Victoria. The names, the maneuvering through arena issues, and a Stanley Cup are all chronicled and this book is a must for anyone who grew up around Victoria’s lone hockey rink. The one thing that shines through, and you’ll say it at the end—man, did she do lot of arduous research to get this completed work. Impressive.

Helen Edwards has been a fan of professional hockey in Victoria since the 1950s when a radio station offered tickets to Victoria Cougars games for a nickel. She held season tickets for the Victoria Maple Leafs and the Victoria Salmon Kings. Spurred by the demise of the Salmon Kings and the death of Bill Shvetz, a Maple Leafs’ defenceman, she embarked on an ambitious project to document the stories of the 483 men to play at least one game for a Victoria team. After over seven years of meticulous research, the book is finally complete.

Helen is an architectural historian by training but was able to combine her two passions, historical research and hockey, to bring to life long-forgotten stories about personalities who deserve to be known to today’s hockey fans.

She has lived in Victoria, BC all her life and is married with four children and three surviving grandchildren.

I am thrilled to announce that softcover books are now available. The retail price is $40.99 but I am selling for $40. For those in the Victoria area, I can deliver to you and save the postage. C0ntact me at heritagelady@gmail.com. For anyone else, the books are available from FriesenPress.com and online sellers. They can ship books to you cheaper than I can due to their volume of sales.

It is so gratifying to see my eight years of work conclude with a book that I can be proud of.

Now I can start marketing

Today I took delivery of bookmarks to be used for marketing my hockey tome. It is a cut-down version of the book cover so reminds potential customers of what book they should choose. This is getting exciting!

It’s getting closer to reality

My book is now in production and should be out in under a month. Despite the size of my book, they have been able to keep the price quite reasonable. The hardcover edition will retail for $44.20 and the paperback for $36.15. That is less than I expected so that is pretty good. In addition, I can sell for less if I want to.

I did not write this book to make money but it would be nice to break even at least.

I will be holding a book launch once I get physical books in my hands.

The proof is finally ready

I feel like I have just given birth. The long-awaited proof of my book is finally ready for me to approve. I will be spending the weekend and some days nexxt week going over the document word by word to make sure it is as perfect as I can make it.

This is a very emotional event for as it is a long time since I started working on this manuscript and, at times, ever wondered if there would be a finished project.

The cover looks lovely and is far more attractive than anything I could have envisioned.

I am so excited to be working on something that looks like a real book. The designer had some questions for me that I can answer and I have a few for him.

I can hardly wait until this book becomes a reality.

It is getting closer

I have been assured that the final design will be ready this month. I certainly hope so, as I have been waiting for this day for a long time. I also heard of somebody else doing a book on a similar topic so want mine out there first. Of course, mine is going to the Hockey Hall of Fame in Toronto, so I guess I have bragging rights for now.

I have fabulous news. Yesterday I received proofs of possible designs for the layout of the book. I am going to take a bit of time to examine both options and will likely take some features from each design. For the first time, I have seen the manuscript as a real book complete with images. It is so exciting.

I think the manuscript is finally complete

I finished the live index and then re-read the entire manuscript catching a few typos and punctuation errors. It was like re-visiting old friends as I checked all the names and made sure they were spelled correctly. I feel like I now have 483 friends (only a few of which I have actually met).

Now I sit and wait for a sample chapter. I assume things will move more quickly after that. All I have to do it to write the thank-you page. I just hope I remember everybody.

It’s been a long time but the end is in sight.